Monsta had school pictures taken last Friday. I had him all ready the night before with the suit that his TiTi gave him for Christmas. He was pretty excited to wear it. Next morning came and it had snowed during the night. We listened to the cancellations on TV and it said that there was a two hour delay. Now…his school is two hours and 45 minutes….what would you do? We figured that it had to be closed. Why bring them in for 45 minutes? We called and called and no answer. That confirmed it, no school. Craig calls once again before leaving for work and guess what…they say Hello. Of course school is on, we always open when it says two hour delay. What???!!!! How come we are always the last to know. Now I’ve got to kick it in gear because we were all in pajamas and just started to eat breakfast. Ugh!

Tried to fix bed head
Threw suit on with sneakers – ack!
Bundled up the cub and
Flew out the door.

We were so late. We arrived at 10:15 (school starts at 9). Luckily, they waited for him. I ended up just driving around for an hour and half (Craig hates when I do that). Picked him up and asked him if everyone like his suit. He replied, “Nobody said anything but I know they really liked it.”

Gush – that kid is something special. 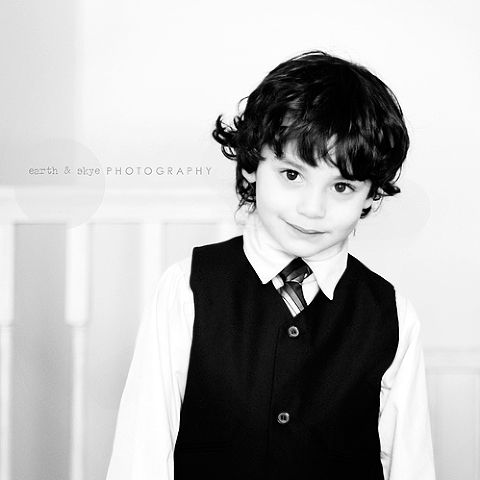 If you haven’t entered yet, what are you waiting for? Tina Steinberg Giveaway!