Let me start this post saying that Craig bought me a new laptop. Whooo Hooo! I love it. The reason that I needed it was not only because my old desktop was a dinosaur but as you all know, we have been transitioning my office into the new baby room. In turn, I need to be mobile. My space will be no more. Sob. Anyways, it has been a tedious job to clean everything up. It is not like I have a new space to dump all the stuff. Now it is down to the computer. I have so many folders of crap, it is ridiculous. Today, I am trying to delete. During this fun process, I have been coming across some great stuff.  Pictures mostly.  I figure I should share a few.  Todays picture is of me and Craig the day after the night he asked me to marry him. 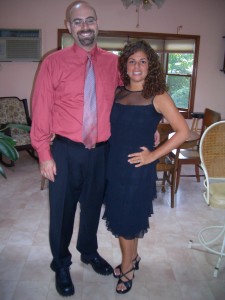 We were (and still are mind you) so happy.  I have to say, we were definitely on cloud nine.  It was August 28, 2004 and we were going to a wedding.  All dressed up with my sparkly ring.  Now, it is two kids later and I can’t believe how all this time has gone by.  We were married on July 17, 2005.  What an awesome day that was!

I like this picture because it shows the Mariachis that came out to play after Craig stepped on the glass.  They continued to play throughout the cocktail hour.  It was very special.

Hope you like the history lesson today.  There will be more.